Fostering Alliances and Accountability in the Classroom. 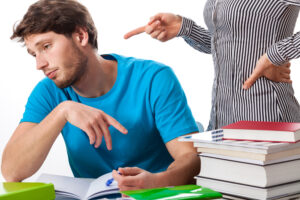 In a recent session of English 111 a student came to class without his paper for peer review. He had written his paper, but as he was running to class his paper had flown out of his backpack and before he could retrieve it, a bus hit it. Fair enough. As the class began the peer review process, and the student took out his computer, I told him he could participate by reading his paper aloud. He said that he had handwritten the paper. As college students don’t even hand-write grocery lists, I found it hard to believe that he’d used paper and pen to draft a five-page paper. On the plus side, he showed up to help his group members with their papers, but it was clear he was lying.

The temptation here is to nail a student for lying; yet our main objective can, instead, be to position ourselves as facilitators and allies, rather than as monitors. Instead of focusing on punishing late work, we can provide flexible deadlines when needed. Most students won’t need this, but if we provide them with these opportunities we shift the dynamic and positions us as an ally who wants the student to succeed. We create an environment where they realize they are accountable only to themselves because it’s up to them to take advantage of this flexibility and help. They can begin to realize that their success is completely in their hands. When they use our flexibility, we both win. We get them to reach the class goals (even if a few days late); they gain the knowledge/practice, and are more likely to do well in the class.

Some of us assume that this strategy undermines the instructor’s authority, leading to anarchy…or at least more egregious lying. Not so. My classroom definitely has rules and order; I set the tasks, the assignments, activities, and deadlines—and I don’t present them as “suggestions.” But being strict for the sake of being strict is unproductive because it sets up an “us vs. them” atmosphere, which makes it more difficult for students to see us as an ally who is invested in their learning. This flexibility can also be used in larger classroom settings because few students will actually need or ask for leniency. Keep in mind that you are not asked to do any “extra” work; rather, you are allowing the student to do their work. (The unprepared student in my earlier example made up the activity on his own time, and he showed me his draft to get credit.)

I advocate this approach because it works. Not only do students meet the course objectives, but also more importantly they gain an understanding that they are responsible for their own learning. Going back to the original example, it is unfortunate that my student felt the need to lie to me, but I understand the impulse behind it. Nevertheless I gave him the extra time and he took part in the activity (on his own time), and practiced the objectives. It would be a storybook ending if I could report that he earned a 4.0 and lived happily ever after. But that was not the case; he did not earn a high grade in the class. But when he submitted his final assignment he was honest and told me that he knew he could have done better. He thanked me for the opportunities I had given him to make up assignments, but he was aware that ultimately he slacked off.

It’s unfortunate that many students still feel the need to lie to avoid punishment or embarrassment. We need to communicate that for us the ultimate victory is not that students submit a certain assignment on time, but that they realize that it’s 100% in their control to succeed or fail. This student realized that, and hopefully he will carry that through his academic career and beyond.

Jessica Canton is a graduate student at the University of Washington in the English Department. She taught Composition and Literature for eight years. She recently defended her dissertation, which explored the connections between the Gothic novel and Greek/Roman Tragedy.