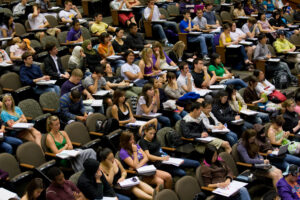 “Oh, that issue. I have it in my classes too. It happens, don’t worry.” This was the result of a conversation I was having with one of my colleagues at a staff meeting about large classroom participation. I had graded for this particular class of hundred students before, so I was aware of the issues around engaging a large group (McKeachie & Svinicki, 2006), but as I moved onto becoming the instructor, I thought I would be magically prepared to visibly and vocally engage everyone at the same time. Quite the expectation for a first time instructor who found herself staring at a hundred silent faces when a topic for discussion was raised in the first week of class! My colleague continued to say, “Firstly, it’s not you so don’t beat yourself up about it. Secondly, I have a strategy for you that works fabulously in my class.”

Next class I went into the lecture hall armed with a small stuffed animal. A Cheshire cat. My new TA. Our large class discussions were now going to be a game. When I opened the floor for contributions to a comment or question, I would throw Cheshire cat into the sea of faces. Whoever gets tagged by the cat has two options – comment or pass. They must keep the game going by throwing the cat to someone else who also either comments or passes. This continues till I ask them to stop. I try to follow up each comment with some sort of feedback to further everyone’s thinking. Dallimore et al. (2004) suggest students are likely to actively participate in classroom discussions when: the learners’ ideas and experiences are incorporated into the discussion; the facilitation is active; the classroom environment is supportive; and the instructor provides both positive and constructive feedback.

Engaging students in a large class is no mean task. I employed this technique for a couple of weeks before I came to the conclusion that it was here to stay. It kept students on point while allowing them the opportunity to pass without feeling bad. The playful element broke icy silences and created an open and encouraging environment for sharing thoughts. It was one of the most effective strategies I had employed to increase visible student engagement, outside of small-group discussions. A discussion prop isn’t the only way to do this of course. You may like to use exit slips – another personal favorite, clickers, and think-pair-share techniques to achieve participation too.

Following this, I did a mini action research study in my own class. Sixty-three percent of class said they never felt intimidated while noncontributing in a large class, which was encouraging. Small group discussion, the use of video, and the discussion cat turned out to be the most popular strategies for engagement. Seventy-five percent of class voted in favor of the discussion cat alone. Students also suggested that small group discussions would be more productive if the discussion points were sent to them in advance. They also pushed for including more personal experience based topics. Weaver and Qi (2005) found that the single largest predictor of a student’s participation was ‘‘faculty-student interaction’’ both in and out of the classroom setting. When professors affirmed students’ participation and ideas, students were more likely to participate. It was heartening to note that 95 percent of class thought that I personally validated their participation. Maybe there was something to learn from Cheshire cat after all!

Happy teaching, you all.

Debi Talukdar is working towards her Ph.D. at the UW College of Education. Her research focuses on incorporating philosophical inquiry and reflective practices in teacher education. Here, she also teaches an undergraduate course in early childhood and family studies. As a fellow with the UW Center for Philosophy for Children, Debi regularly does philosophy with elementary school children in Seattle. Debi has previously worked with children and teachers at schools in India, and with the foster care/residential care system in the UK. When she is not working, she enjoys yoga, traveling, and cooking.